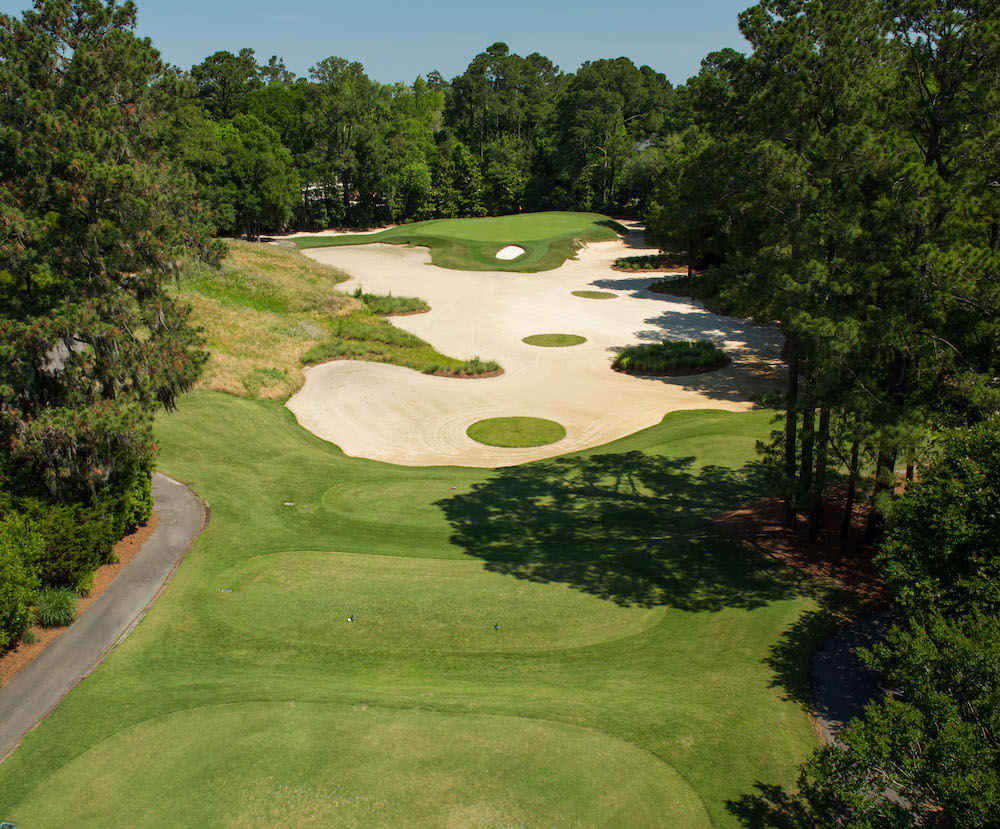 Dale Dunlop is “The Maritime Explorer,” and he’s traveled the world and written about it from his home base in St. Margarets Bay, Nova Scotia for more than three decades. South Carolina and its Lowcountry have been among Dale’s countless global visits, which have included golfing excursions to each of Mike Strantz’s masterpiece designs at Caledonia and True Blue.

Dale’s love for Strantz’s work prompted him to offer his own hole-by-hole insights he gleaned from his experience at Caledonia. Here, in the third of three parts, is Dale’s take on holes 13-18 of his Caledonia journey:

Hole 13 – “For me, #13 is the absolutely perfect driving hole as the fairway turns right to left and there’s lots of room to take it down the right side and let the ball do its thing. However, you’ll notice that there’s yet another well placed live oak on the left-hand side which will block you if you play it too close to that side. Let’s assume you have made that great drive, which is what I have to do, what next? Well, the reward is an absolutely hellacious second shot. The green is elevated with sand on both sides and water on the back. Nothing less than a perfect shot will have you putting for par and how many perfect shots does the average golfer make in one round? Beautiful approach to look at, mind numbing to play.”

Hole 14 – “By now you might have noticed that water is starting to come into play with increasing and annoying frequency. It’s all down the left side on the extremely tight #14, but Mike gives you a break by putting bunkers alongside the water to save your poor ball from drowning. The only problem is that, once you are safely ensconced in the bunkers, there’s – guess what? A huge live oak growing out of the middle of the last bunker. You can’t go over it, under it or around it. Trust me, I tried all three. This hole can reduce a grown man to tears, but today there’s a neat distraction once we finally found the green. The turtles are all keeping an eye on the sleeping gator. After adding up my score on this hole I thought about challenging the gator to a wrestling match, but my partners talked me out of it. Thanks guys.”

Hole 16 – “Just when I thought things couldn’t get any harder they did. #16 is the hardest hole on the course. At 375 yards it’s going to require a pretty lengthy second shot into the green. Only problem is that there is a huge pond that almost certainly forces one to go over some portion of it. The sensible play is to forget about getting on in two, unless you’ve hit a titanic drive. Instead lay up on the left side of the fairway, pitch on and hope for a one-putt. No word of a lie, that is the strategy I followed and actually made a putt for par. Yeah!”

Hole 17 – “The last par three on the course is certainly no easy par. With an elevated green today’s pin placement (back right) is not for the faint-hearted or the left-handed. The only thing I could do here was fire at the pin, knowing my shot would go left. It did, but not far enough. Hello Mr. Pot Bunker.”

Hole 18 – “This is the hole that we were looking at from the verandah of the clubhouse and I think it’s the prettiest hole on the course. For once, the water is on the right-hand side or so I thought at first, until I realized that it cut right across the fairway. No matter what there was going to be a substantial carry on the second shot. I’m sure they’ve had more than a few balls hit the clubhouse on this hole as nobody is going to under club. This was actually a real fun hole to play as all of us hit well positioned drives and only one caught the drink on the second shot. BTW, it wasn’t me for once. Ending with a par made me forget the horror of #14 and put a smile on my face.”